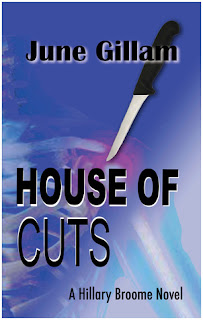 When bodies of dismembered managers turn up as superstore displays, reporter Hillary Broome’s articles on the grisly murders catapult her byline from California into the national limelight and threaten to expose a shameful secret that could ruin her career—as well as bring her to the crazed killer’s attention.

Hillary has to connect up with detective Ed Kiffin in a race to catch the insane cutthroat before he tortures and kills a woman who's begun to fill a void in Hillary's heart left by the mother who abandoned her years ago.

House of Cuts is the first in a new series by author June Gillam. The main character - Hillary Broome - is one of the strengths of this series. Instead of the slender, sexy investigator with fabulous hair usually offered, we have a real woman. She carries a few extra pounds and is oh so human - a writer having dipped her toe into plagiarism several years back. Her error led her to accept work under the radar in a small town for a local online paper. However, the fact it is online becomes an issue when her stories began to be picked up by larger new sources.

A big box store has just moved into the town, putting most of the mom and pop stores out of business. Those left unemployed have to accept a humiliating hiring process and work at low wages in the new store.  One becomes a killer, targeting those he feels are responsible, dismembering their bodies and creating a scene with their parts to make a statement.

The first body found is someone in charge at the big box store.  Hillary has just arrived to interview him when the body was discovered, putting her on the scene and introducing her to detective Ed Kiffin. Things get intense as another body appears and then in the end, one of Hillary's friends is threatened. Will she arrive in time?

The killer is creepy and what he does to the bodies is on the psychotic end, but Gillam keeps the gory details to a minimum, letting the plot lead the way.  While this books is a thriller/mystery, it also offers a bit of romance and a commentary on how big box stores changes a small community and the affect on those who are displaced.