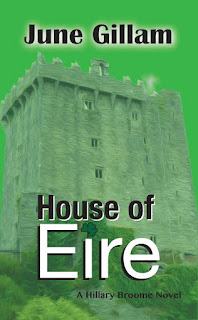 
Hillary Broome is back! As she travels through Ireland and
learns more about her friend’s crusade, she uncovers secrets
and mysterious forces nudging her to fly away home.

In House of Eire, Hillary Broome, a reporter-turned-ghostwriter from Lodi, California, and her detective husband Ed fly to Ireland—Ed for a gang conference in Dublin and Hillary to research her ancestors in Galway. Hillary plans to meet up with her friend Bridget, who’s pushing a greedy developer to include a memorial museum inside his proposed Irish theme park. As Hillary travels through Ireland and learns more about her friend’s crusade, she uncovers secrets and mysterious forces nudging her to fly away home.

House of Eire is book three in the Hillary Broome series by author June Gillam. While they are all stand alone, there is a personal timeline for the main character that is best followed by reading the books in order.

In book three, Hillary and detective Ed Kiffin have been married for ten years and have a beautiful, precocious daughter named Claire - a true hand full.  They are finally headed off to Ireland on the honeymoon they always wished for.  Kiffin has a conference to attend, so will only be spending time with them here and there. Joining Hillary and Claire is her friend Sarah who she saved from a psychotic killer in book one.

The vacation turns serious when the close friend Hillary is supposed to meet up with - Bridget - ends up dead. Hillary is devastated.  Evil forces begin to circulate and a second murder occurs. Our heroine is torn between loyalty to her friend, the desire to solve her murder and returning home to ensure the safety of her daughter.

Similar to the author's first book in this series, House of Eire offers more than just a simple murder mystery.  It addresses the effect on a small local community when an international developer decides to invest dollars in a big tourist theme park without respect for the community nor consideration for how it will affect local people's lives.