on January 26, 2018
Check out my review of other books in this series! 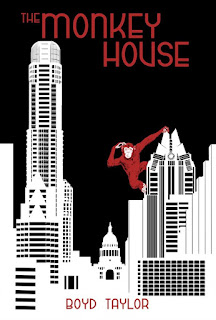 
This, the third Donnie Ray Cuinn book, pits Donnie against the old friends and new enemies guilty of land fraud and corporate greed. Donnie returns to Austin from his law practice in the Texas Panhandle to confront All-American football player Wesley Bird, his former best friend. In the company of beautiful, athletic Anna Kaye Nordstrom, Donnie experiences the "new" Austin of glitzy condos, trendy restaurants and social media. He also revisits the "old" Austin of barbecue, power politics and greens versus developers. Donnie finds that not much has changed.

While his foster mother Lena is gone, I love that book three in the Donnie Ray Cuinn series re-introduces us to his beloved "Papa" and his birth mother. Donnie is still happily living and running a law practice in the Texas Panhandle

Development is the driving force of this book's plot. The land across from the retirement center where his "Papa" and birth mother live formerly housed a lab where experiments were carried on out monkeys. With the lab closed because of public opinion, land developers were eager to create more condos and retail space. Residents wanted an open park where people could stroll and relax. "Papa" was leading the fight.

Danny is also lured back to Austin when he finds out his former friend - All-American football player Wesley Bird - has sweet talked Papa and his mother into investing most of their savings in a land development scheme without having him check the contract. It looks like the development has fallen through and the money's gone. Unfortunately Papa has also encourage many in his retirement community to do the same.

As Donnie moves through a twisted maze of hidden motives and backroom deals, he reconnects with a former lover - Anna Nordstrom - and explores the old Austin of his young along with the new Austin that is emerging.  Highs, lows and a bit of humor blend together in this tale of intrigue. Will Donnie find a way to get everyone's money back?  You'll have to read to find out.