The Cleansweep Counterstrike: A Matt Tremain Technothriller by Chuck Waldron 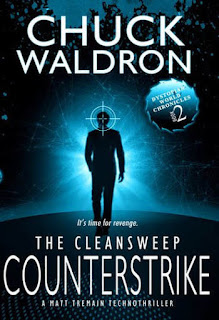 In this sequel, Matt Tremain is back, facing an even deadlier threat. Deceit and intrigue lie hidden behind the collapse of Operation CleanSweep. It’s time for revenge.

But the clock is ticking for Claussen, too. Fraternité des Aigles, The Brotherhood of Eagles—a shadowy group that secretly financed Claussen’s Operation CleanSweep—wants answers and their money back. Consumed with rage, Claussen risks everything to get to Matt before the Brotherhood gets to him. Tremain is once again partnering with a police detective, Carling. Knowing they are being lured into a possible trap, they decide to face their nemesis, Charles Claussen.

Across four continents, Claussen sets traps, pursues Tremain, and continues to execute his signature brand of global chaos. When his fiancé’s life is on the line, can Tremain stop Claussen’s madness and still avoid getting killed?

The Cleansweep Counterstrike is book two in a series. Sometimes these can be stand alone books, but I think this time it's important to read them in order.  The main character - Matt Tremain - is a blogger who in the first book discovered a plot by billionaire Charles Claussen to bring a return to Nazi principles. He along with several other important characters ending up thwarting this plot, but Claussen has disappeared.

At the start of The Cleansweep Counterstrike, Matt - along with several others who helped him thwart this plot - are receiving threatening emails from the Cleansweep founder. Claussen is still furious his beautifully laid out plan to eliminate undesirables was ruined and he is bent on exacting revenge on all who thwarted his efforts. In this book we are also introduced to a mysterious, powerful foursome called The Brotherhood of Eagles. They supported Claussen's Cleansweep project financially and with it's failure, are hunting him down.

While the first book was more about Claussen's behind the scenes plotting to launch Cleansweep successfully as well as others efforts to thwart it, this book is more of an international thriller. We follow Matt and his friends efforts to track down Claussen while avoiding his deadly attempts at revenge. As well we follow Claussen's constant flights around the globe in an effort to stay one step ahead of those hired by The Brotherhood to bring him in.

It's a great read that will keep you entertained throughout, and the ending hints of another book to come in this series - great news for fans of this exciting genre.


Buy the Book: Amazon ~ Barnes & Noble ~ Chapters Indigo ~ Indiebound ~ Add to Goodreads
Check out a review of book 1 in this series - The Cleansweep Conspiracy - HERE! 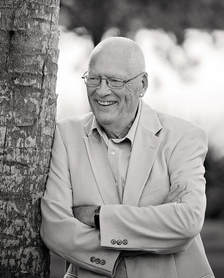 Chuck Waldron is the author of four riveting mystery, thriller and suspense novels and more than fifty short stories. Inspired by his grandfather’s tales of the Ozark Mountains and local caves rumored to be havens for notorious gangsters, Waldron was destined to write about crime and the human condition. Those childhood legends ignited his imagination and filled his head with unforgettable characters, surprising plots and a keen interest in supernatural and historical subplots.

With literary roots planted in the American Midwest and South, and enriched by many years living in the fertile cultural soil of metropolitan Ontario, Waldron now resides on Florida’s fabled Treasure Coast with his wife, Suzanne. While keeping an eye out for hurricanes, alligators, and the occasional Burmese python, visitors will find Waldron busy writing his next crime thriller.
Connect with Chuck: Website ~ Twitter ~ Facebook ~