I have been intrigued for awhile now by all the interesting food recipes coming up. First is the cauliflower craze that included everything from carb free breads, to tortillas to rice dishes. The second has come with the Keto diet craze. So lots of low-carb or no-carb recipes options floating around.


My husband is willing to try lots of things, but he's honestly more of a meat and potatoes man. So far the whipped cauliflower (sub for mashed potatoes) I tried was a MEH for him even though I liked it.  So this time around I decided to dive into the Keto recipe bank and see what I could come up with.  Two recipes stood out for me, each with a little different focus. I decided to make them both on different days and compare the flavours.

The first is a more traditional Keto style recipe from a site called The Diet Doctor. There are at least 3 different Cauliflower Risotto recipes on this site, so it might be worth looking at all 3 and seeing which appeals to you most.  This one uses both heavy whipping cream (I switched to half and half to make it a little lighter) along with 4 oz. of butter. The second is from a site called Keto Adapted. With the same 4 oz. of butter but no heavy cream, it's a bit lighter.

My husband and I found we enjoyed both almost equally.  The first from The Diet Doctor was my husbands slight favourite. I had a slight preference from the one from Keto Adapted. Both had a rich flavour. The first had a definite taste of the heavy cream to it. So if you like the taste of heavy cream this one's for you. If you prefer your risotto rich but without that distinct cream taste, then I'd suggest the second. My only note on the second was I cut back on the mushrooms and it still was chock full. I love mushrooms but found 2 lbs of them overtook the risotto instead of blending into the overall taste.

If you are open, I'd love you to try them both and then give me your personal feedback in the comments.  Which did you like best and why??? 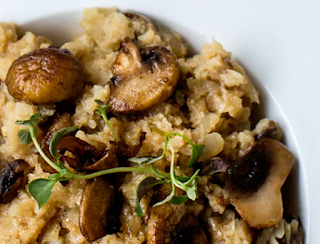 
Instructions -
Rinse and trim the cauliflower and shred with the coarse side of a grater, or divide into smaller florets and pulse in a food processor until rice-sized.

Add cream, half of the butter, onion powder and lemon juice in a large skillet and bring to a simmer.
Add cauliflower and simmer on medium heat, stirring frequently, for 15-20 minutes or until it becomes as tender as you like it.

Heat a small, dry skillet over medium heat. Add pine nuts. Stir constantly to prevent burning. Toast until they get some color.

Add the fried mushrooms to the risotto and stir to combine. You can also add the mushrooms on top.
Serve risotto with freshly chopped herbs and some extra Parmesan. Top with toasted pine nuts and sprinkle with olive oil.

NOTE - Just like with rice, some prefer a softer texture and some like it al dente. Be sure to test the cauliflower mixture frequently and get it off the heat before it becomes too mushy. 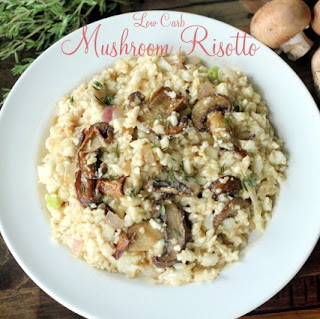 Instructions
Place cauliflower flowerettes in a food processor and pulse until small pieces of "rice" (or use a cheese grater).

Heat 2 tablespoons oil in a large saucepan over medium-high heat. Add the mushrooms, and cook until soft, about 3 minutes.Remove mushrooms and their liquid, and set aside.

Add 1 tablespoon oil to skillet, and stir in the shallots. Cook 1 minute. Add cauliflower rice, stirring to coat with oil, about 2 minutes. Add ¼ cup broth to the "rice," and stir until the broth is absorbed. Stirring, until the liquid is absorbed, about 5 minutes.