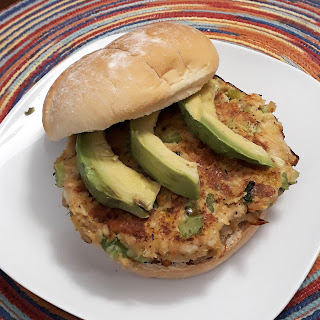 The lowly can of tuna. In a family without a lot of money, meals made from tuna were a staple of my childhood along with casseroles made from hamburger and Campbell's condensed soup, spam and fried bologna.  As we grew older, the things my mom served did change, but the memories are still strong.

Change has come to canned tuna as well. Now you can get it packed in water instead of in oil and there is the old fashioned pinker version or the ritzier white albacore type. But when I was young, it was simply canned tuna fish in oil.

I found myself thinking of burgers this week, but really bored with the usual choices of beef, chicken or veggie. As my thoughts wandered to other possibilities, I landed on canned tuna. My mom used to serve patties made from canned salmon, so it wasn't too much of a leap.

After looking at several recipes online, I started to sort out what I liked and what I didn't. I didn't want to add mayo or relish.  I did want some fresh vegetables in it and I did want it to have a decent flavour.  Below is the mix I came up with. It makes 3 regular size burgers.  If you do 4 they will be very small. 2 would be enormous.


The other tip I have is don't make the patties too thin. I made this mistake as I forgot that they wouldn't shrink smaller and plump up like beef burgers, and that made them hard to flip. They should be just the size of the bun you're using. I liked avocado on them, but the toppings can be whatever you like - more thai sweet chili sauce, more peanut sauce, an asian slaw, avocado - or just the standard tomato, lettuce and ketchup.

More than anything, feel free to play with the ingredients and make it your own. Next time I might add minced ginger root and make an Asian slaw to top the tuna burgers with. The possibilities are endless.

Combine first 12 ingredients and mix well. Shape into patties the size of your buns. Try not to make them overly thin as they will be difficult to flip in the pan.  Prepare a frying pan with a little oil or cooking spray, heat on medium just until hot and gently add patties.  You don't want the pan too hot, so err of the side of a lower heat.