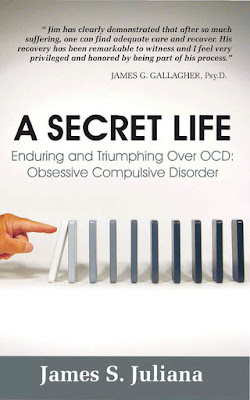 Are you one of the millions who reside within a secret life, a life which constantly feels out of your own control: Are you plagued by repetitive thoughts and/or actions which interfere with your daily activities?


The author lived for more than 40 years with an undiagnosed form of mental illness, a phobia now known as OCD: obsessive-compulsive disorder. His emotional pain and suffering were at times almost unmanageable. In his mid-sixties, the author, a loving husband, father and accomplished high school teacher and athletic coach, discovered a unique psychologist within the Denver therapeutic community who utilizes a radical but highly successful treatment that's allowed the author to control his OCD symptoms almost 100%.

"A Secret Life" is one of the few books written by an OCD sufferer and descries in detail the pain and chaos living with this illness can cause not just the victim, but those closest to him. This story doesn't stop there, but provides readers with options and advice dealing with OCD from someone who broke the curse of living a secret life. Now he's ready to share his story in order to help others.


I am intrigued to hear how you managed a successful career that put you in the public eye while dealing with your OCD. How did you hide or minimize it when working? Was your family aware of how much you were struggling?

As a child and adolescent, I was a master of hiding, completely and quite successfully, my OCD from everyone except my parents and therapists. When I began to date my future wife, Betsy, at the age of fourteen, I slowly confided in her. My family, not even my therapist, no one was ever aware of how deeply I was struggling, except Betsy. While working, I was constantly on guard daily to hide my mental mind games, by concentrating on obsessions and/or compulsions, always in private; in my office, between classes, before and after practice, inside of my own head, without visibly displaying my inner struggles. As a teacher I felt I had to hide my OCD from not only fellow teachers and coaches, but from the hundreds of students and athletes with whom I interacted daily.

How and at what age did you discover the psychologist with the radical treatment that changed your life? Was it frightening to take that first step and book an appointment? Was the process of the treatment challenging? Did it take a long time?

My psychiatrist, David Lyons, with whom I had been working for almost twenty years, recommended I consult with Dr. James Gallagher, a psychologist, during what came to be a turning point of my life at the age of 65. At that time I had indicated to Dr. Lyons I had reached my breaking point in my struggles with my daily obsessions/compulsions. Dr. Lyons realized at this point that I was mentally ready to try the controversial Exposure and Response Prevention Therapy, which he and I had discussed in the past.

There was nothing frightening with regard to taking this next step, because at this point in my life, I was facing the end of my rope. After 55 years of seeing multiple therapists while trying multiple prescription drugs, I related to Betsy that I was ready to try anything in order to find relief from my daily struggles. The ensuing treatment with Dr. Gallagher was less challenging than it was a total relief to my life-long, endless battle. My OCD symptoms began to diminish within weeks of my first session with Dr. Gallagher.

Please share about how the idea arose to share your powerful story by writing and publishing a book? Was it an idea you quickly embraced or did it take time to grow and become a reality? Were your friends and family supportive of your choice?

As a life-long educator and coach, the oldest of 8 children and the father of 4 of my own children, I have always relished and enjoyed the idea of sharing my experiences and knowledge with others. I began to think about writing a book about my life-long experiences with OCD as soon as I realized that Dr. Gallagher's influence and the Exposure and Response Prevention Therapy was changing my life drastically for the better. I felt a moral responsibility to continue with my vocation of teaching, by sharing my successes against OCD.

I have always related to Betsy that I would never wish my struggles with OCD on anyone.  After living my life basically free of OCD symptoms for 3 years, I told Betsy I was going to write my story. By chance I had met a writer and book editor through a close friend, and after conferring with this couple, I decided to ask them to help me professionally to edit my book. Betsy and our 4 grown children were totally supportive of my efforts. I asked a couple of my closest high school friends to read portions of the book as I progressed.

Once you started, how did the writing process work for you? Did you have a set time every day when you wrote or did you write when inspiration hit? Did writing your story bring up a lot of emotions as you revisited your past?

In January of 2019, Betsy and I met with the husband and wife editing team at which time I presented them with my unfinished manuscript which included, several hundred hand written notes I had been compiling over the years on OCD. Steve and Joyce, our editors, were impressed with what work I presented to them, and suggested I begin to elaborate, under their direction, on the many different topics related to my OCD. Steve and Joyce were convinced that I was writing about a very pertinent topic, and that I had the outline for a very compelling story.

I began writing daily for 2-4 hours. Betsy and I would meet with the Singulars weekly to discuss our progress and additional material which might be included. The Singulars were superb in providing suggestions and ideas for further avenues of discussion and explanation This process continued for about 4 full months. There were times when my writing stimulated severe emotions, and I would have to stop working and either step away or discuss the past with Betsy.

When working on this book what came easiest for you? What did you find hardest about the process? Did you have any outside support to go to when stuck?

I could not have written this book without the constant support of my wife Betsy who has been my best friend since the age of 14, and who knows this story as well as I do, because she has lived this life with OCD beside me. The Singulars were a constant source of ideas, suggestions and expertise. Betsy and our 4 children all contributed considerable time and effort in their writing of how my OCD affected them personally over the years.

Are there any words of support and hope you'd like to share with others dealing with a mental illness?

Never give up! You must persevere and find one person with whom you can totally relate regarding your mental problems. Never be ashamed to admit that you suffer from a mental illness. You are not a bad person if you contract cancer or heart disease or some other illness. Likewise, you are not a bad person because you suffer from a mental illness. Choose a professional therapist with whom you feel comfortable and with whom you can relate honestly and freely. Be open to trying any therapy which may benefit your condition and any prescription drug which may help you in your struggles. Everything happens for a reason. There are professionals out there who can assist you in successfully living a happy and productive life, despite whatever mental illness you may possess.

What's next for you? Do you think you will write more books? Take the stage to speak on OCD? Or move in other directions?

Going forward, my first goal is to continue to live a happy and productive life with my wife, four children, three grandchildren and multiple friends and family. I plan to make up for lost time and lost moments of happiness and joy with my family. I would like to continue to assist individuals suffering with OCD as a speaker, lecturer or motivator. Becoming a full-time spokesman for OCD sufferers, as an example of how happy one can be even living OCD, is my goal. 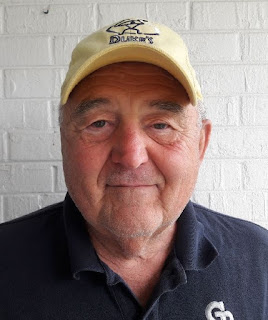 Jim Juliana was a hard-working family man with a devoted wife and adoring children. As a teacher, he taught numerous subjects over a 28-year career, was an assistant principal/athletic director for three years and mentored generations of youngsters in the classroom ad in athletics. Juliana was a coach for four years at the high school level. Coach Juliana has been a part of two state championship teams, a city championship team and several league title teams.

He spent two years as a college instructor and football coach. But Jim Juliana had a secret life, one over which he had no control. For most of his life, he also fought - and eventually defeated - an embarrassing and almost debilitating OCD. OCD, or obsessive-compulsive disorder is an anxiety disorder that effects three to five million adults in the US each year. OCD involves irrational fears or repeated thoughts or obsessions that drive an individual to engage in repetitive behaviors or compulsions. Jim Juliana's life was finally changed when he found a therapist whose treatment all but eliminated his OCD incidents. A Secret Life chronicles Juliana's battle against his OCD and gives readers options and information for treatment based on his experiences.