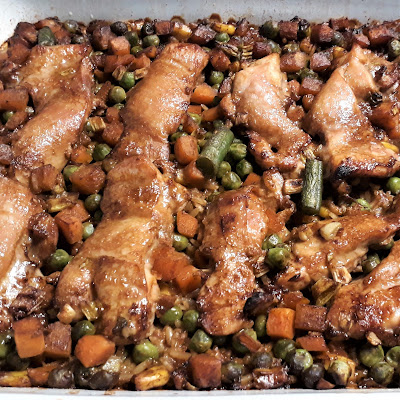 Chicken and rice casseroles have been around forever. They are basic Western food offering sometimes just the meat and rice - you have to make the veggies separate - and sometimes the full meal deal, a one pot supper.
I was thinking of my youngest son the other day. He just moved in with his girlfriend and we're heading over soon to bring a gift and see their new place. I know one thing he used to make was a chicken and rice skillet meal. As his girlfriend only eats Chicken and Fish for her proteins, I began to wonder was there a recipe for an interesting chicken and rice dish I could take along as a "welcome to your new home" present.

So many choices. Some I had to switch out the veggies as they weren't his fav, some used too many canned ingredients. In the end this one found on a site called Spend With Pennies caught my eye. Although it does used frozen mixed vegetables, there are no cans of condensed soup to be seen.  I also love the idea of the meat marinated and then basted with an Asian inspired sauce. Fast forward to last night!

I've actually made this twice now. I forgot to take a photo the first time and it's not always a good thing if you use theirs.  The second time came out better, but neither time did I get a good caramelized topping on the chicken - although I was closer the second time.
Here are a few notes from my second attempt.  The 20 minutes covered followed by 30 minutes uncovered didn't quite work.  After 20 minutes, the rice I used wasn't cooked enough for the chicken to be properly basted with the reserve marinade. I also found the rice, even with 50 minutes, had a few chewy bits.  I think it's really important to use a very plain white rice or even a converted rice.  Avoid any fancy rice that might have longer cooking times or need more water.
I have used my photo at the top, but include the one from Spend with Pennies to see what it looks like when it works out perfectly.  This is a simple casserole for a family dinner that has a lot of flavor. I wouldn't use it with company though, especially if you use the frozen vegetable mix.

Mix Chicken and Marinade in a bowl. Set aside for at least 20 minutes, up to 24 hours.

Preheat oven to 350°F (180°C). Place Rice ingredients, including oil, vegetables, soy sauce, cooking wine, stock and water, in a baking pan. Spread the rice out evenly. Remove chicken pieces from the marinade (reserving marinade) and place on top - chicken will be partially submerged in the liquid. Cover with foil and bake for 20 minutes (next time I am cooking it 30 minutes covered).

Remove foil, baste chicken with remaining Marinade (dab it on generously), spray chicken with oil then bake for a further 30 minutes (next time I am reducing to 20 minutes uncovered) until chicken is caramelized, liquid is absorbed and rice is fluffy. If you want more caramelization on the chicken, flick the broiler on for a few minutes.

Set aside for 10 minutes before fluffing rice then serving, garnished with scallions if using.
asian inspired chicken chicken and rice easy recipe make it tonight one pot meal recipe rice