What a great idea - short stories that are quick to read offering a complete mystery.  If you have just a few minutes and want to escape into a fun read, the Fiona Quinn Quick Mystery series is perfect.  They are a part of Kindle unlimited and also available for just a dollar, and range around 25 - 35 pages each.
Banking on a Murder -
Fiona’s old college chum, Priscilla Conroy, has recently moved back to the Pittsburgh area after a most unpleasant divorce. Fiona was looking forward to reconnecting with her friend to help cheer her up and the two had made plans to meet at the bank where her friend worked after it closed—only Priscilla never shows up for the lunch date. Thinking the worse, Fiona is beside herself and spends the entire Memorial Day weekend searching for her friend. Did her ex-husband abduct her? Has she been murdered? Somehow Fiona knows that the key to Priscilla Conroy’s disappearance lies within the bank. But how can that be?
​
Join Fiona Quinn for a quick mystery that’s sure to keep you guessing! 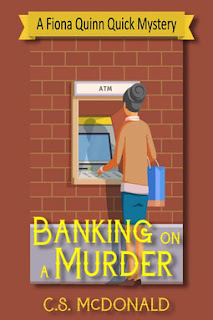 Review:
In Banking on Murder, Fiona is supposed to pick up an old friend she hasn't seen in ages at the bank where she works so they can catch up over lunch.  Unfortunately she is left sitting in the parking lot. Her friend, Priscilla, never comes out.  She watches cars come and go at the ATM, but that's it.
First she is angry at being stood up, but then she worries. Has something happened to Priscilla? Heading back to the bank she see an old lady at the ATM who was there several times before. What is going on? The answer will surprise you.
Buy the Book: Amazon 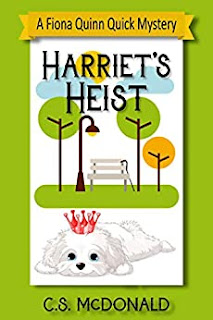 Harriet's Heist -
Fiona Quinn arrives at her parent’s home in Daytona, Florida for a short visit only to be informed that their usually quiet retirement community has been besieged with robberies—cash, jewelry, and more. Her mom told all the neighbors Fiona is a wiz at catching bad guys. Yikes!

Can Fiona crack the case? Hopefully, but what’s an amateur sleuth supposed to do when her Maltese, Harriet, shows up decked out in the stolen goods? Double yikes!
​
Join Fiona, her parents, Harriet, and some pretty crazy old ladies for a real jewel of a quick mystery!
Review:
Another great quick mystery in the Fiona Quinn Mystery series. This time it's set in Florida.  Fiona is there for a short holiday with her parents, but on the way home from the airport her mother drops that she's volunteered Fiona to help solve a string of robberies in the retirement complex. This was not the vacation she was hoping for - sun, sunburn, and some of her moms fabulous Lemon Meringue Pie.
No matter how much she tries to keep out of it, she couldn't avoid the group of women waiting at her mom's home (wearing every piece of jewelry they still had in fear it would be stolen) and the detective they invited to update them on the case.  It didn't take long for Fiona to be shocked at how little the detective was doing and how negative he was about solving it. Her detective instincts jumped in. This wasn't good enough!
When an unexpected clue arrives, Fiona is determined to figure it out and hopes the detective will agree to help.
Buy the Book: Amazon ~ Audible 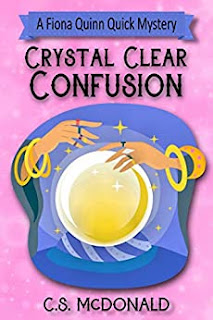 Yikes! Fiona’s been having a recurring nightmare and it’s driving her to distraction—so much so that she’s allowed her kooky neighbor, Astrid Dingle, to search for the answer through her crystal ball. What could be the cause of the dream, and what lengths will Fiona go to get to the crux of it all? You’ll be chasing dreams with Fiona, Detective Landry and Astrid in this fun quick mystery!
Review:
Of the four short stories I am reviewing here, this one is a little scarier. It's about a recurring nightmare that honestly made me squirm.  I found myself frightened for her.
What is the source of this nightmare? There are several possibilities. One high on the list is the new janitor that is grouchy and a bit frightening - and occasionally mean.  She and the kids are certainly uncomfortable around him.  The neighbor who considers herself a psychic is sure it's simply something she is scared of. Not only does she do a reading, but she drags Fiona to the zoo to get up close and personal with a snake. It doesn't go well.
Running on empty from lack of sleep, and worrying constantly about why the dreams are occurring, could prove problematic as she has a review coming by the new vice principal who she has bad memories of from her university days.  Is she in danger? Could she lose her job?
Buy the Book: Amazon ~ Audible 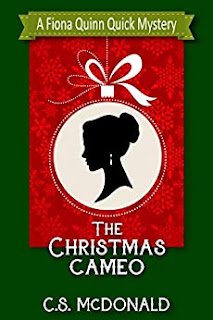 The Christmas Cameo -
​
A lovely cameo brooch is discovered in Fiona’s late Uncle Wilbur’s house two days before Christmas. The pin bears a romantic Christmas message from Wilbur for his new wife with the initials, D.A.S.
How very strange! To the family’s knowledge, Uncle Wilbur had never been married. So, who is this mysterious woman? Now, Fiona is on a holiday mission to locate D.A.S. and deliver the belated gift.
Question is, what happened to the marriage? Is D.A.S. still alive after all these years? And if so, can Fiona find her before Christmas?

The Christmas Cameo is truly a feel good holiday read.  The mystery here isn't murder or crime, the mystery here is a cameo.  The people who bought her uncle's house found it hidden in the back of a cabinet and give it to Fiona to figure out.  As far as she knew, her uncle never married. So why would he have a cameo with the initials D.A.S.?
With the help one of her boyfriend Nathan's co-workers, another cop, the unknown history of her uncle starts to come to light. But there is still a mystery.  Why did he never tell anyone he married and why was that marriage annulled after only a few months.  The answer, when Fiona discovers it, is definitely a surprise.  And the heart-warming ending is perfect for a holiday tale. 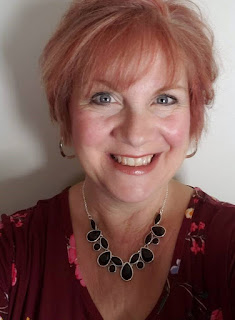