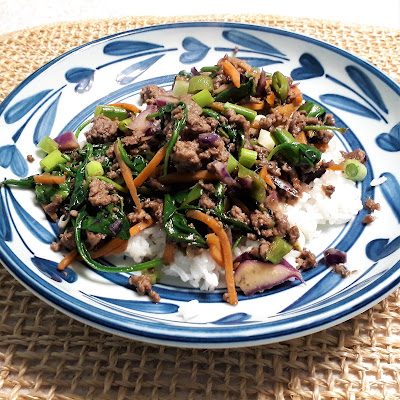 I usually plan what to cook a few meals ahead so I am not left trying to figure it out at the last minutes. And that keeps me from cooking too much prepared food or ordering in too often. It also adds way more fresh vegetables into my diet which I love.  However, planning ahead means remembering to pull meat out of the freezer the night before, and I so often forget to do that when I don't know what I am cooking.
The other night I thawed out a package of extra lean hamburger for the Next day's supper not knowing what it would become - meat loaf, spaghetti sauce, hamburgers, burritos. Then I remembered my friend sharing a recipe with me that her daughter was going to make her for dinner one night. It was an Asian inspired ground beef dish that had looked intriguing. I thought why not. I had all the ingredients on hand.

However, when I asked her what she thought about it after trying it, she said the dish didn't have as much flavor as she would have liked. That rang a bell with me as a year ago I had tried a similar dish and felt the same way.  It was time for a Google recipe exploration.  After perusing many options, no one recipe stood out, but there were similarities to be found. I decided to just wing it and for once it actually turned out to taste pretty good.

You could serve this on white rice, your favorite thin Asian noodles, cauliflower rice or even on quinoa (although this would be my last choice).  I was going to use a trick of mine to bring down the calories by mixing a smaller amount of cooked rice with a larger amount of cooked cauliflower rice (my serving only), but just ran out of steam. Instead I kept my rice portion small while piling it high on Glen's plate.

My only note is that I tend to wing it when adding small amounts of sauces and seasonings. I pour or sprinkle on what looks like a tablespoon or teaspoon. I think most people who cook a lot do this, especially when creating a new recipe. The amounts shown below should be pretty close to right.  However, be sure and taste it, and then add more of whatever ingredient you want to pop. I did forgot I was going to add some rice wine vinegar, but the final dish tasted great just the way it was, so I have no idea if it would be good to add or not.

No two people taste things exactly the same, so be brave and change things up to make this recipe your own.