As we had been to Kingston, Ontario, several times to visit our daughter Danielle and her significant other Alex, we already visited a lot of the local sight-seeing areas. Both of them had to work the first few days we were here, so our day was pretty unplanned.  After 2 days on the road, that was just fine with us. We were ready for downtime.

The company Glen worked for has a super large production plant here, which I had only seen from the outside. So the first day, even though he retired in December, he decided to take me for a tour. Alex works there as well. In fact he met Danielle when he in training at the head office in B.C. where Glen worked and she was working as summer receptionist while in university.

Guess what? It is HUGE, over 200,000 square feet!  We said a few hellos at the front to people Glen knew and then donned safety glasses and ear protectors.  I was wowed by the size of the immense air handling units, then found that sometimes 3-4 of these actually were just part of one unit.

There were lots of overhead cranes to move things, a paint booth you could drive a large RV through without a problem and a giant machine that cut, bent and then put holes in sheet metal automatically. This was surrounded slightly smaller machines that did each of these steps individually for when the main machine broke - something that seems to happen frequently.


In the middle of the plant I was intrigued to see what I thought was a cold food machine dispenser.  I wandered over to take a picture and found out I was wrong . It dispensed supplies for the workers, things like heavy duty gloves. Each employee has an individual code they punched in to access needed items. This code is then used to track usage for each employee.


As we continued our tour I realized we were getting lots of stares. It wasn't until near the end we figured out why. We weren't wearing the mandatory long pants and closed toed shoes - OOOPS!

After this I wanted one trip DT.  Every time I come I have to stop by the Kingston Olive Oil Company. First I get bottles of favourites that are running low such as White Peach Balsamic Vinegar and Basil Olive Oil. Then I ask what's new and pick up a few mini-bottles to try. This time I snagged Raspberry Balsamic Vinegar and Persian Lime Olive Oil. Lastly there are always a few gifts to buy. They are great presents for anyone who loves to cook.

As we drove into the DT area, we hit serious traffic. A quick Internet search said the annual Kingston Buskers Rendezvous was running from Thursday through Sunday.  After parking we walked around, but only found one duo performing a comedy unicycle routine. This was during the day on Thursday, so I assume the evening would probably have more and the weekend was when the main events would run.

We ended the day with a fabulous meal made by Danielle - an amazing treat for me as I am always the one to cook at home. And let's face it, it always tastes better when someone else makes it.  This night we dined on roasted cauliflower, gnocchi with pesto and wonderful fish fillets cooked in butter and herbs. YUM!

Day 2 was pretty quiet as well.  A walk, a pop by to see Danielle at work as she had a new job since our last visit, a short outing to the store and lots of reading, writing and downtime filled the day until everyone was home from work. Relaxed and quiet hit the spot.

Very special this day was that Danielle again made a wonderful meal. You have to understand, she not only worked all day, but is still recovering from serious knee surgery and wearing a big knee brace. It's hard enough for her to at work all day as it's impossible to keep her knee propped up all the time. To then come home and stand in the kitchen for another hour making us a meal is a true sacrifice. Her knee was pretty sore by the end.

Tonight we dined on delicious caramelized onion and goat cheese tarts as a starter, followed by chicken, leek and cheese stuffed pitas and home made roasted yam wedges. Alex stirred up a Sriracha mayonnaise for dipping. We were stuffed! In fact I had to save half my pita for lunch another day.

Day 3 held an outing we had not done on previous visits, a trip to cottage country. Alex's family owns a cottage on Bennett Lake that was built 40 years ago by his grandfather and father. Everything was hand-hewn and constructed, even quite a bit of the furniture. Bird carvings done by his grandfather were scattered about.

There is a very European style wall inside that looks like a cottage within a cottage. It's too hard to describe, so I took a picture (below). The other great moment was when Alex's mum pulled out a pile of magazines from 1951-1956. The fashions, the ads and the headlines were just amazing to leaf through. From What Will We See On the Moon to talk of ways to avoid the beach police if you were in a bikini, we smiled our way through. One even had an article on a woman who doubled as Charlie Chaplin - the first Drag King as far as I know!


The cottage is up on a hill with a nice bench at a lookout point. To get down to the lake and dock, Alex's grandfather made a crazy steep, long set of concrete stairs. I have no idea how he even made these without falling down the hill. The grade is that steep. Thankfully there is a hand rail.  I would hate to go down these stairs in the winter.  We were treated to a lake tour on their boat which they use for both fishing and tubing.

Small cottages were tucked in the trees here and there. Not surprisingly, a boat and dock accompanied each. Shallow areas we boated through sported blooming lily pads and we circled several islands. It was so peaceful and beautiful.  How wonderful for Alex and his brother to spend summers here. They even had a tree house to retreat to.

Then we rounded a point of land and realized a rain storm was coming right at us!  Pedal to the metal, we sped back to the dock as the storm hit.  I was behind the wind screen so fared pretty well, but Alex and Danielle were sitting out on the front of the boat and got quite wet. It was a hilarious moment with only one clap of thunder to cause a little concern. Let's face it - lightening and an aluminum boat alone in the middle of a lake are not a good combination.  We couldn't stop laughing as we debarked, though. It was a memorable experience.


It wasn't long after that the rain stopped. Alex and Glen headed down to the dock with fishing gear as Alex as interested in learning how to cast for fly fishing. To both of their surprise, fish were biting. Most were very small, but it was still fun.

It turned exciting when Alex thought he caught a BIG Pike.  As he was reeling in this obviously large fish was when the real surprise happened. The pike opened his mouth and spit out a little Blue Gill. The Blue Gill was the one that had taken the fly and the Pike had tried to eat the Blue Gill whole. Way too funny. Glen caught several small Blue Gills as well. He tried to make it look bigger in this photo by holding it closer to the camera!

The evening ended with Alex's mum serving a wonderful meal of chicken with sauce, rice, stuffing and baby carrots. Alex and Danielle provided a big mixed salad and 2 kinds of dessert. Again, wonderful not to have to cook - the food always tastes better. And let's face it, this gourmet fare is just not our average cottage meal. 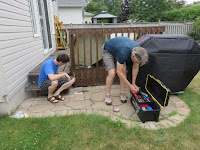 Our last day visiting came oh so quickly. I woke up far too early, so took time while having my coffee to catch up on my travel blog.  Glen is going to help Alex with the installation of a new BBQ - converting it to natural gas and hooking it up to the gas source already installed by their deck. If the weather is good, Glen and I might take a long walk along a nature trail. A nap is definitely in order where I woke up so early.

For our final evening, I thought something we do at home would be nice - dinner and a movie night. It's our turn to treat so we offered them the option of  a meal out or take-out brought in. Danielle suggested the Tango Nuevo Tapas and Wine, a restaurant Danielle and I had lunch at on a previous visit. It was an amazing supper of small bites and each was oh so tasty. The only problem was you thought your weren't eating much, but by the end were stuffed.  We topped it off with a stop a Mio Gelato - a tradition.

For the movie, we'll come back home and rent it to watch on their big screen TV. I suggested Zootopia. We have seen it but they haven't. I can't wait for them to see the scene where the main characters visit the DMV. It's priceless.  Below is a trailer featuring one of my favourite scenes. If you haven't seen the movie - DON'T WATCH!  It's best when you don't know it's coming.

Tomorrow it's off to Toronto!  This is the turning point where we start the long trek back home.