Road Trip Days 21-23 - Long Days on the Road, a Respite in Missoula and Coming Home.


AHH - the final post.  23 days on the road is a long time and we are getting weary. In fact, after driving 4 days straight, we decided to stop for an extra night in Missoula, Montana, for a break. We really had no idea what we were doing when we booked our hotel, we just totally lucked out.

The Red Lion Inn turned out to have the best hotel wifi, a very comfortable room, beautifully decorated breakfast area and it was situated a very short walking distance from a series of walking trails along a river and through a park. There was also fly fishing nearby which called Glen.

Our full day here we went our separate ways.  I wrote a travel article in the morning, then hit up a nice coffee shop - City Brew - for an iced latte. That was followed by a couple hours walking the trails along the Clark Fork River and surrounding parkland, snapping pictures here and there. Along the south side, the was several great green spaces with trails, a skateboard park, a few interesting buildings and cool oases to be found under the bridges.

As I crossed to the North side of the river, I found a Missoula Saturday Farmer's Market in progress. It was packed with people shopping for local produce and food items.  Nearby was a great carousel, est. 1995, the long line-up filled with families waiting their turn. Attached to it was Dragon Hollow, a free play area built with over 1,000 volunteer hours.

The highlight of this walk was a lookout at a small river rapids which created a back wave that locals used to surf on a very short board and to practice kayaking. Then as I finished my stroll I enjoyed a wonderful array of beautiful flowers in bloom. I ended my alone time by writing a second travel article and followed by a leisurely hot bath while reading a great chic lit novel.

Glen went out fly fishing in the morning, took a break at the hotel at lunchtime and then went out again late afternoon. There were fish to be seen, but none decided that they wanted to bite what he was offering. The fishermen that were successful around him were using a type of lure he was not set up for. Oh well, it was still a peaceful time out in nature. When he returned, he showered and we went out for a simple dinner and then walked to the nearby grocery store to pick up lunch for tomorrow's drive.

Kudos to the Red Lion Inn in Missoula for location, friendly staff, comfortable room, lots to do nearby and the best free breakfast we had on our 10,243 K trip.  For those who do not know, the free breakfast varies from hotel to hotel.  Usually there is a lot of continental style items but the hot offering ranges from a simple dish of scrambled eggs to others that include sausage, bacon or potatoes.

In addition to the hot breakfast items, other options can include a waffle maker, toast/bagels, breakfast cereals, yogurt, apples and/or bananas and even a few times - biscuits and gravy, but it's usually the same each day.  At the Red Lion the hot option varied each day - one time offering breakfast burritos and sausage and the next cheese omelets, hashbrowns and bacon. WOW! This is the only time I ever was offered a breakfast burritos and it was delicious.

The next 2 days were pretty much straight driving with stops for lunch, gas and bathrooms, so highlights were few and far between. We discovered a fog light had been demolished by a rock somewhere before this stop - the rock still sitting inside the casing.  One of the rest areas had literally a HERD of ground squirrels looking for handouts - the most I had ever seen in one place. Glen had to snag a bit to feed them of course.

Our last hotel stop was in Ellensburg, Washington. There was a glitch. When planning the number of hours to drive that day, we had forgotten we crossed one more time zone. We couldn't cancel, so called the hotel to see if they would let us check in at 2:30. Fortunately they said yes and then waved the early arrival fee. There really was nothing else to do in that town for just a few hours.

As it was so early, Glen snagged a fishing license and headed out to the local stream. An impressive thunderstorm rolled in which brought him back to the hotel quickly. It soon passed and he headed out again. He was happy to not just sit in a hotel, but the fish again ignored his vest efforts. I curled up with a great book and just relaxed. The only negative here was that the hotel's air handling wasn't set up right, so the strong smell of pool chlorine permeated the hallways. Fortunately it didn't come into the rooms. 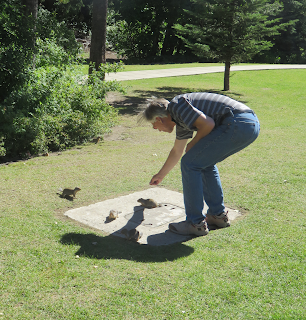 The last day on the road dawned early for us.  Just a few days before we had been in Kingston, Ontario, a 3 hour time difference. The fact we were able to keep dozing until 6:30 a.m. was amazing. After breakfast we quickly packed up and hit the road. Nothing too exiting, just driving.

The only high moment was crossing the border. It was a good half hour as always, but we were back in Canada at last and I could finally turn my phone on. There were a whopping 4 missed voice mails on my cell. When I got home there were 7 messages on the answering machine. Obviously we were missed and despite all the texts and posts, many forgot we were not in town.

All is now up to date.  A few celebratory margaritas have been consumed and it's time for nap. Tomorrow it's back to work, but for the rest of the day, it's still vacation time.
Clark Fork Market Clark Fork River Dragon Hollow playground Ellensburg fly fishing ground squirrels home Missoula Montana Red Lion Inn road trip travel Washington