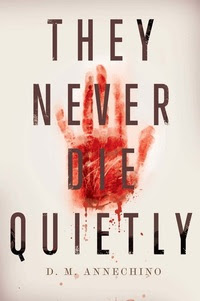 Review of Resuscitation (book two) - Here
Review of A Piece of You (book three) - Here.

They Never Die Quietly tells the story of homicide Detective Sami Rizzo, who is assigned to head a task force investigating serial killings in San Diego. Simon, the highly intelligent, cunning, and deceptively charming villain, redefines the depths of human evil. He believes God has given him absolute authority to purify his unholy victims through a ritual that ends in a grisly crucifixion.

Driven by warped religious beliefs and guided by his dead mother, very much alive in his subconscious, Simon abducts “chosen ones” and holds them captive in a Room of Redemption. There, the victims helplessly await their crucifixion. Detective Rizzo urgently yearns to solve the case and gain the respect of her male colleagues, but her obsession to apprehend the killer on her own clouds her thinking. When Simon outsmarts Rizzo and captures her, determined to make her his next victim, she must employ all her resources—both physical and intellectual—to outwit the villain at his own game.

They Never Die Quietly is the first of three books I will be reviewing featuring San Diego homicide detective Sami Rizzo along with her partner Detective Al Diaz. Each of the three deal with serial killers. Each serial killer is definitely creepy and got under my skin. Because of the way the victims were killed - and the reason for the killing - these books fall under the thriller category for me as I have a vivid imagination. They are just over the line - disturbing, but you should be able to sleep.

In They Never Die Quietly, we start with a murder as it is happening, but from the victim's point of view. We quickly learn it was a painful crucifixion with the woman's child asleep in the same room. Sick! Then the author introduces us to the characters involved. There are a few expected things about the plot. Sami Rizzo is the only female detective in an all male squad, so has to be better and smarter than her colleagues to gain their respect.  She is a single mom balancing work and home. She is the first to start to guess who the killer might be.  From there the book is told from three points of view - the killer's, Sami Rizzo's and Al Diaz's.

The storyline kept my interest from start to finish and the method and reason behind the killings were unique. As a writer I give the author kudos for being able to go into that dark space creatively.  I would have had nightmares. But if you look at the reviews on Amazon they range widely. Why? I think you have to love reading thrillers with creepy killers first of all. Secondly, there were a few small plot details that perhaps needed revisiting such as Sami's choice to meet the suspected killer alone without backup - a bit unbelievable for a smart, top-notch detective.

Love your murder mysteries with more of a thriller bent? Then the killer here will be right up your alley. 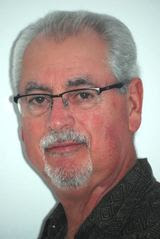