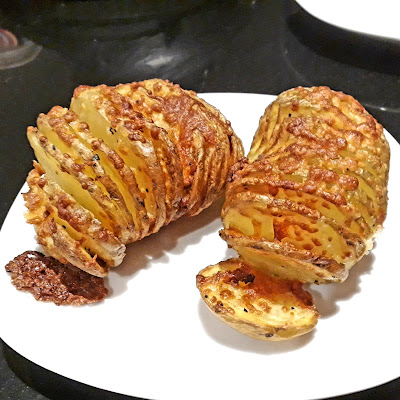 In December I received a Duo Crisp Instant Pot/Air Fryer/Crockpot - a combined Xmas and January birthday present. I've become a huge fan. Everything I've tried in it so far has been easy to make and tasty. The pot has a nice finish that makes clean up easy, so doing my best not to mar the surface with any metal object.
I stumbled across recipes for Hasselback Potatoes several months ago and was instantly intrigued. I love potatoes and here was a new way to offer them. I quickly found ways to make them varied widely. Originally this post was going to offer two options - one baked in the oven with thin slices of potato stacked on end and this one. Even though the slices in the first one were tossed in a mix of butter, salt, pepper, garlic and fresh herbs, they were only good not great. I decided to change direction and focus on the recipe I liked best.
In this version, the preparation of the whole potatoes - thin slices cut 3/4 of the way through - is the more traditional presentation.  The potatoes are then brushed with butter (or butter with garlic, herbs, etc) - on top and down into each slice - sprinkled with salt and pepper, and then baked in the oven. I wanted them crispier, so decided to use my air fryer and loved the final results. 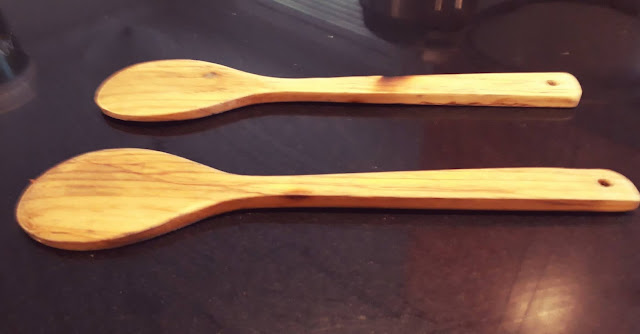 Slicing the whole potatoes most of the way through can be tricky. The suggestion I saw most often was to put the potatoes in the well of a big wooden spoon. Instead, what I found was super easy and fool proof for me was putting the potato between 2 wooden spoons with flat 1/4" handles on a cutting board.  It took seconds and every slice stopped at exactly the same place.
Notes on cooking - Most say heat your air fryer to 350 degrees, so I stuck with that.  Cooking times varied from two 15 minute sections, to two 20 minutes sections.  In between these sections most agreed - baste with butter or oil and move around if not cooking evenly.  I went with the two 15 minutes sections.  The potatoes were cooked, but on the slightly firmer side which is the way my husband prefers them. If you like them softer, then I would use the longer cooking times.
When to add the Paremsan - For the potatoes I made shown above in the photo, the cheese was added in the middle break between the two 15 minute cooking sections.  I brushed the potatoes with butter, sprinkled them with salt and pepper then piled parmesan on each. I wouldn't add it any sooner.  If you chose to do two 20 minutes sections because you like the potatoes softer, I would add the cheese the last 10 - 15 minutes to be safe. And I wouldn't used that cheap powdery Parmesan. Quality cheese either shredded, or even a small coarse chop texture, would work best here.
I hope you enjoy making these as much as I did. Please comment on the recipe or tag me if you make them yourself so I can see what you did.
= = = =
Air Fryer Hasselback Potatoes
2 servings

Ingredients -
2                    Potatoes
3T                  Butter
1                    Large Garlic (or 2 smaller cloves).
salt and pepper
1/4 C             Parmesan cheese shredded (approximate - whatever fits on top of your potatoes).
Instructions -
Finely mince garlic or put through a garlic press (this 2nd works the best). Add to the butter along with a bit of salt and pepper. Melt the butter in the microwave or on the stove top. You should be able to smell the garlic. Keep warm.
Place a cutting board on the counter and set 2 wooden spoons with flat 1/4" handles on it. Put a potato between the spoons and tuck them in tight on each side. Using a large chopping knife, create 1/4" slices (no bigger but can go smaller if you like) in the potatoes from top down to the spoons.  Set aside and cut 2nd potato.
Using a basting brush, brush the butter down into each slice of both potatoes. Be gentle as you don't want to break the potato apart. Then brush the tops of both potatoes. Use about 1T butter per potato. Set aside the last 1T to brush the tops of the potatoes mid-cooking. Place the potatoes in your air fryer leaving a tiny bit of space between them if you can.
Air Fry at 350 degrees for 15 min. (20 min. if you want a softer potato). Then open your air fryer, brush with the tops with the last tablespoon of butter, sprinkle on a little more salt and pepper and then pile some parmesan on each.  Put the lid back on and air fry for another 15 min. (20 min. if you want a softer potato).
Note - in case you didn't read the note above, if you use the longer cooking time for a softer potato, don't add the Parmesan until the last 10-15 minutes.  20 minutes is just too long.
airfryer airfryerrecipe Duocrisp foodie hasselbackpotatoes hasselbackrecipe Instantpot potatoerecipe potatoes recipe recipes YUM