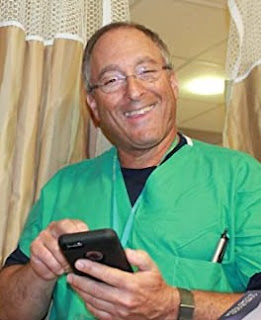 Can you share a bit about your journey to becoming a writer/published author? Any interests or early signs as a child that hinted you would later put pen to paper?
For the principle reason that it happened so quickly, I suspect my pathway to trying my hand at novel writing was probably a bit different than many of my fellow writers. I’ve always been an avid reader of fiction, especially mysteries, but it never crossed my mind to actually sit down and give serious story-writing a try until one evening when I had an idea for a conspiracy story—a “what if” about a surgeon who becomes the target of a blackmailer bent on forcing him to commit an act of malpractice. From the time the idea popped into my head until I was sitting in front of my computer beginning to write, the prologue was less than an hour. I spent most of that night writing and soon discovered I’d found a new passion. I’ve been tapping away at my keyboard ever since.

As far as getting one of my manuscripts between covers, I was quite fortunate in finding a small publisher willing to take on my first book. I’m fairly certain it didn’t break any sales records, but it was the segue I was hoping for: that book led me to a literary agent interested in representing an author of medical mysteries. From there, I published five novels through Penguin Random House before deciding to pivot to a self-publishing platform.

As you have had a long career as a surgeon, what was it that inspired you to write medical thrillers? Are any of the scenarios used for your plots based on events you saw at work?

I don’t think I can pinpoint precisely where my inspiration for writing medical thrillers came from. After I decided I enjoyed writing mysteries, it seemed logical to follow the time-honored advice, “write what you know,” and use the medical sphere as the backdrop for my stories. I’d would say my ideas, themes, and plotlines for my books come from two sources: first, the thousands of clinical events I’ve witnessed and read about during my long career as a pediatric surgeon; and second, pure fiction, drawing on my imagination to invent a plot that offers the reader both a suspenseful ride and some insight into a current controversial medical issue.
Finally, if I’ve discovered anything about avid mystery readers, it’s that they love to try and unravel the “whodunnit” aspect of the plot before the protagonist does. I try to keep this in mind when I’m creating the twists, turns, dead ends, etc., which together form the heart of the book and bring it to life.
How does the writing process work for you? Do you schedule a time every day, work madly when inspiration hits or ?

I can’t say I have any rigid practices when it comes to the time I spend writing, but I do have some preferences. One problem that I’ve never faced, which I think is common amongst aspiring writers, is to make “productivity deals” with themselves, such as, “I’m not getting up from this chair until I’ve written at least X number of pages!” Writing should be a passion—a labor of love, one the author looks forward to. I oftentimes tell writing students, “If writing for you is more like cranking out a high school term paper . . . well, maybe you should find something else to do.”

I can’t say I wait for the perfect mood or a clap of inspirational thunder to sit down and write. If that were the case, I’d be moving along at a glacial pace, taking decades to finish a book. Since my schedule has become less demanding of late, my chosen writing schedule is to get out of my house early in the morning, head to a spot like the local Starbucks, put my headphones on, listen to instrumental movie soundtracks, and write for a few hours. Time permitting, I do the same thing in the late afternoon. In years gone by when time was tighter, finding time to write was more difficult. Fortunately, I was able to locate a few hideaways in the hospital where I could steal an hour to work on my current manuscript. Otherwise, I found time to write during the evenings, weekends, and vacations tailored to allow ample time for working on my novels.

In general, I don’t feel that I’m a particularly fast writer. I spend a considerable amount of time revising and editing my manuscripts, which comes from my firm belief in the old writing adage that advises, “Good books aren’t written—they’re rewritten.” When Thomas Harris was asked, “How come it takes you so long to write a book?” his response was, “Because that’s how long it takes me to get it right.” I’m also a believer in taking the time to become familiar with the teachings of the craft of fiction writing. There are many hopeful authors who push back on the notion by arguing, “But we’re part of a fenceless artistry, and our creativity shouldn’t be constrained by anything as mundane as rules.” I remember attending a writing conference where a very successful storywriter addressed a question on that very topic by politely saying, “I understand as a writer we need to be free-thinking, but perhaps it’s better to learn the rules of our craft before we start breaking them.” Amen to that.

What do you enjoy most about the writing process or comes easily to you? What feels most like a chore - a struggle?

Here’s my simple answer to that question: I enjoy everything about the writing process, but I’m not sure any of it comes easily. Authors have different styles when it comes to putting a book together. These techniques range from winging it from page one to meticulously outlining every chapter before they put the first word down. In my case, as soon as I have a basic storyline that includes a beginning, a middle, and an end, I start writing. The most exciting part of the process is adding chapter after chapter and watching the manuscript take form.

Thrillers get your blood pumping. After an adrenalin infused writing session, what do you do to leave your writing behind, shed the energy and step back into your regular world. Do your plots ever haunt your dreams?

There’s no question that writing sessions can vary considerably with respect to their emotional intensity. But in general terms, even after spending a few hours writing an emotionally charged chapter or two, I still feel I’m able to step back into my real world fairly seamlessly. However, along these lines there is a related point worth mentioning: practicing pediatric surgery is a stressful way to spend your day. All physicians irrespective of her or his particular specialty face the problem of continuous stress and its close relationship to burnout. Doctors need the means to achieve a satisfactory work-life balance, which translates into only one thing—finding activities that help recharge your stress resilience battery. For me, writing has helped accomplish this imperative.

I can’t say my stories haunt my dreams, but I do spend a lot of time thinking about my plotlines. At times I’ll have a revelation about a manuscript I’m working on, and the next thing I know I’m racing off to my laptop to get it down on paper as soon as I can. The only problem with this is that occasionally, the new idea mandates that a completed chapter gets elbowed because it no longer makes sense in the plotline. The process can be a little frustrating, almost like sending a large picture through a shredder and then trying to paste all the pieces back together again. 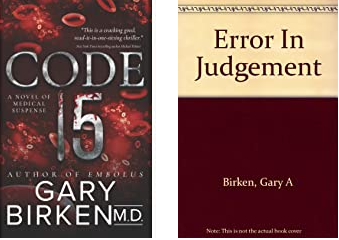 Are you ever concerned about the effect of your medical thrillers creating a fear of being in a hospital in impressionable readers?
Your question is a thought provoking one. I’m old enough to remember when the movie Jaws was released (it was in June, probably intentionally). It was an enormous box-office hit, but in the weeks that followed there were countless media reports recounting how large numbers of people had become terrified of the ocean and wouldn’t even dare to dip their big toe in the water. On a different note, I recall a fellow author who once told me that for a suspense novel to “work,” the author has to strive to take her reader out of their comfort zone, and I can’t even begin to imagine how many readers the masterful Stephen King has terrified—I being one of them after reading ’Salem’s Lot!
I guess what I’m trying to say is that in our quest to entertain our readers, there’s a small risk that an impressionable individual could possibly suffer a degree of unintended emotional stress. All we can do as writers is pray that nobody is ever seriously affected psychologically by anything we write. I have enormous faith in the reading public’s intelligence, and I believe they realize that as writers we intend no malice in anything we put down on paper, and that what we do is ultimately in the name of pure entertainment.
Do you have any spoiler alerts you'd like to share on any new book you might have in development?
Currently, I’m working on two manuscripts: one is a story of medical suspense that focuses on an ethical issue I’ve long wanted to write about. I’m pleased with the progress I’m making and have my fingers crossed its release date will be this summer. I’ve have also started work on a murder mystery that draws on elements of the cozy subgenre. There’s no question it resides a little outside of what I’ve written in the past, but it’s turning out to be an exciting project for me. Finally, it has more than crossed my mind that at some point, I’d like to try my hand at narrative non-fiction. I anticipate selecting five of my most interesting cases over the years (not necessarily triumphs) that have have offered both the families and the medical team an insight into a number of life’s lessons.
connect with the author: website ~ twitter ~ facebook ~ instagram ~ goodreads
author fiction garybirken interestingpeople interview ireadbooktours medicalthriller People prognosiscritical thriller