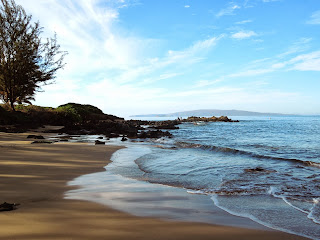 By my age, almost everyone you know has gone to Hawaii - most several times. Glen had already been to Maui 5 times before we met. This was way back in a previous relationship before most of the the island had been developed. Kihei where we ended up staying was mostly an empty space back then. Now it is a bustling community of condos and businesses. Why?  The weather. This is the desert side of this island, so the weather is more consistently sunny and warm.

Every day when we arose - usually early because of the 3 hour time difference - things looked pretty nice everywhere. By 1 p.m. clouds usually encased the upper portion of any local hills and it wasn't uncommon for there to be rain on them in the afternoon. Wind seems to be a constant here in the afternoon. Mornings and after sunset are usually calm, but the middle of the day has a strong breeze. That has implications for when you want to do things.  Snorkeling, diving and tours on a boat should be in the morning unless you don't get motion sickness. Dinner cruises are always evening, timed for when things quiet down. Surfers are out when the wind is up as it drives the waves higher. Snorkeling from the shore is more flexible, but you still have to watch the bigger waves during windy times. 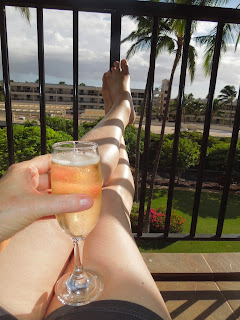 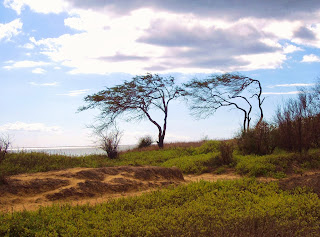 Now for the travel. If you can find a non-stop, that's great.  It's a long ride even from the West Coast. I would also suggest arriving in the middle of the day. There can be delays at the airport. Our luggage carousel stopped working and those of us who were still waiting stood around over 45 minutes. Finally they changed carousels. The lady next to me said this has happened before to her. Then the car rental is a bus ride away and they process everyone very slowly. That took another 30-40 minutes - half spent at the desk. Very friendly, just not speedy.  There was a way to pre-pay your car it appeared which meant you just walked past the counter and out to your car. Going to check that out next time. If I had arrived late evening, I don't think I would have been as patient.

Walks for exercise should be in early morning or late afternoon. It avoids the crowds and is cooler. Drink lots of water before and after. So many people forget this important note and end up light-headed or with a headache. If you like to snorkel, you don't really need book a boat tour. There are tons of places all over the island. I would suggest having a buddy unless you are really experienced and do be aware of the currents. Renting snorkeling equipment is cheaper than buying if this is just an occasional outing and you get better quality. I rented a mask, snorkel and fins from Boss Frog's  - $35 for 7 days - that were corrected for my vision (I wear medium-strong glasses). It's cheaper if you don't need the correction. It all comes in a great mesh bag along with some defogger. I have snorkeled with poor gear and it really takes away from the experience, so I suggest spending that little bit extra and getting the right stuff.

Iao Valley State Park
This afternoon excursion came about as we wanted to stroll in a more lush part of the island. Overall, it's really just a short uphill trek to view the Iao Needle and then back down for a walk along a rushing river with fallen guava fruit decorating the ground and creating a lovely aroma. Then there is another small section that recreates a native farm/garden where taro root is grown in pools created by diverting water from the river. We probably spent more time driving to this park than there, but it was a nice change of pace in terms of climate and we managed to stop a few places on the way back for a look see. It misted rain on us the whole time we were in Iao, but as soon as we were a half mile away we were back in full sunshine and wind. The hair dried a bit funny.

Lahaina
Another afternoon trip we took. This is the old city where whaling was originally centered. The thought was that it would offer the work of a lot of local artisans, but that wasn't the case but for a few exceptions. I saw two wood carvers working on the street, managed to find a dish towel silk screened locally and found interesting local images created out of silk paper by a local artist at The Village Gallery in Lahaina next to the Baldwin House Museum.. The rest of the shops offered the standard fair of t-shirts, board shorts, sarongs and dresses. I did enjoy the giant Banyon Tree that spreads out to cover a whopping 200 feet in its own park.

One shop that took my breath away and I mistakenly assumed was local, only to discover later it was a chain with shops in both Canada and the U.S. - CHAPEL HATS. They of course featured mostly hats that people would buy for regular wear in a wide variety of styles, but threw in a few that showcased a theatrical side. My favourite were 2 leather Steampunk top hats out of leather - one male and one female - that I would die to own. I love everything Steampunk and am determined to one day own an outfit and find a place to wear them.

The other wonderful part of Lahaina was the art galleries. There was a full range, but 3 in particular stood out. The Christopher Egan Galleries had photographs printed onto special paper that attached to glass. You could mount these with a light behind or put in the window of your office/home and enjoy. This effect was great with colourful tropical scenery. They also had an amazing selection of glass sculptures including one from Venice created with glass typical in Michelangelo's time. Kush Gallery had surrealistic paintings by artist Vladimir Kush.  I normally am not into surrealism, but his work is exceptional and I found it very compelling. Obviously just needed to see this type of painting by the right artist.

Then there was Signature Galleries where director Nisla introduced us to the Steampunk work of artist Dale Mathis.  I covet to the extreme his Astrological Clock and his Wicked Table (coffee table with gears that are constantly moving). I also loved the whimsical sculptures of Nana Lopez. This is a local artist who does every step of the process including casting (most artist give their work to a foundry for casting). Glen was totally taken with the Edison cat sculpture.  I loved a big giraffe not showing yet on the website.

It's dark by 6 so that was the end of our adventures. Dinner is always easy - something  on the barbecue accompanied by salad, fruit and fresh rolls if we're really hungry.  Can't wait to see what the rest of the holiday has to offer.
banyon tree Boss Frog's chapel hats Chistopher Egan Galleries Dale Mathis iao needle iao valley state park kihei lahaina maui Nana Lopez Signature Galleries snorkeling steampunk travel vladimire kush